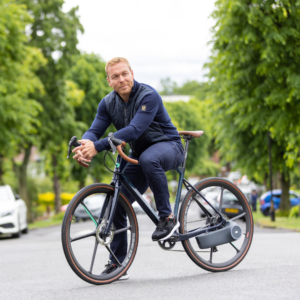 Launched today, Skarper™ is a ground-breaking eBike drive system set to revolutionise the world of eBikes. Skarper drives the bike via the rear disc brake transforming any bike into a high performance eBike and back again in a matter of seconds.

Sir Chris Hoy has been heavily involved in the product development since its beginning and is excited about what it means for the future: “I’ve always been an advocate of getting more people on bikes, regardless of their fitness, ability or age, and I’ve discovered that eBikes can play a huge role in making cycling more accessible to anyone. It opens up opportunities – whether it’s making a commute possible which would otherwise have been too difficult, keeping pace with a fitter friend for a challenging bike ride, returning to riding after an injury or illness, or just going further on your rides and seeing more for the same effort. eBikes offer something for us all; I even take my kids to and from school on an eCargo bike which they absolutely love!”

“What I’m most excited about with the launch of Skarper is that we are offering something entirely new. People will now have the freedom and flexibility to choose whenever they want electric assistance. Within a couple of seconds they can transform the way they ride. I truly believe this is going to make a significant impact on the industry by opening up cycling to a much wider audience”.

Skarper inventor and co-founder Dr. Alastair Darwood, is no stranger to innovation, having previously invented and developed several medical devices in orthopaedics and anaesthesia whilst working as a doctor in the NHS. At the start of the pandemic, Alastair invented one of the novel emergency ventilators selected by the cabinet office for rapid production and worked with Red Bull Advanced Technologies to develop the device in record time.

“At Skarper, we live and breathe innovation and this is just the beginning of our product development”, says Dr. Alastair Darwood. “The Skarper system is fully enclosed and wire free, seamlessly integrating into your bicycle via its DiskDrive™ technology. It is an ultralight, clip-on motor technology, transforming any bike into an eBike with no modification required to the frame or wheels, and without compromise on performance. We are also very excited to be working with Red Bull Advanced Technologies on an off-road version, news of which will be released later this year.”

The Skarper unit fully charges in under 2.5 hours and has a range of up to 60km. With a suite of sensors and control algorithms, the motor intelligently responds to the terrain and provides instant, class leading power as needed. Skarper will be available from 2023 and, with demand expected to be high, the company will soon be taking pre orders for those who want to be amongst the first to use Skarper.According to Ean Brown, CEO and co-founder of Skarper, “this innovation is set to revolutionise the industry with its cutting edge DiskDrive technology. For the first time you can hold an eBike in the palm of your hand. Ultimately, it is our ambition to see the DiskDrive disc brake fitted as standard from the factory on millions of bicycles around the world.”

Skarper is promoting a world in which consumers have the freedom to create their ultimate bike, with no compromise.